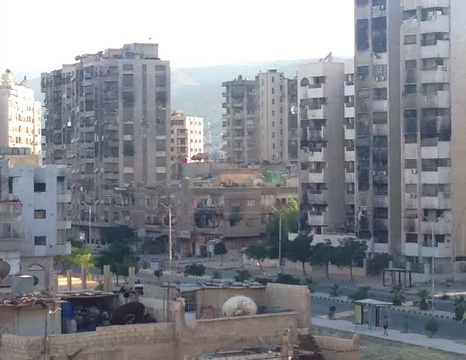 The more you sweat in peace, the less you bleed in war
Norman Schwarzkopf

Life after rape is a war that you constantly battle. Life after rape means that the damage that has been done to you is not something that you can heal but you can manage. I can’t tell you or wrap up for you what life is after that – but as you get to know who I am, you’ll understand how coping with that changes your life.
.
4 years after what happened to me I graduated high school, my older sister and myself moved to Damascus to study at university. I started studying psychology (but never completed). My dad refused to fund my college because he thought psychology is a profession for women only (seeing that men aren’t allowed to have feelings). So, I had to start working and my first job was a kindergarten school teacher (still my favourite job of all time).
.
The war started on the 15th of March,2011 when student teenagers in Syria wrote on school walls “Freedom” which meant freedom of Al Asad and his government. I am not going to dive into politics but you’ll get my view on the war as I continue. We had a beautiful life in Damascus, I can’t describe to you how much love I have for the City of Jasmine. Damascus lives through my veins and dies in my distant memories every day.
.
My sister, two cousins, and myself lived in one house in Damascus. The early days of the war were very scary, the sounds and events escalated slowly but surely. In the beginning we used to hear a lot of gunshots, helicopters, and it escalated into heavy machine guns, explosives from Air Force, tanks and etc… I remember the first time we heard a helicopter hovering and then targeting a house in our neighbourhood – my sister, cousins and myself were terrified. I remember we were all uncontrollably crying thinking that we were going to die. We used to hide in the bathtub (for no smart or meaningful reason). We also used to sleep in one single bed because we’d be too scared to sleep alone in case we die, we wanted to die together.
.
Walking through the beautiful streets of Damascus and hearing the sound of death is devastating. Seeing the soldiers roaming around the city day and night was so heavy on my heart. Safety was no longer a feeling we knew, we all felt extreme fear and anxiety. When you walk through the streets of Damascus everything is blue – people’s faces were colourless. As if the sky was dark, the buildings were dull, the streets were in pain. With all of that, Damascus is the most beautiful paradise you can imagine. Damascus is the love that forever consumes my heart, it just never dies.
.
As the war got more heated, I started participating a lot in protests for human rights. I, as most people, became very politically involved and opinionated. As a gay man, I wanted freedom. Freedom to be who I am, freedom for a religious-free country that accepts everyone and anyone, freedom to live without fear. Against my family’s wishes, I insisted on being part of a movement I truly believed in. Time passed and the situation only got worse, people were getting arrested, shot, buildings were demolished by bombings. 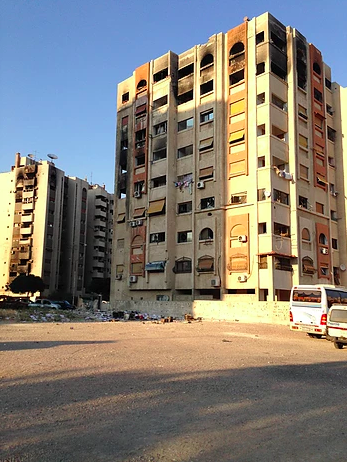 This is what my Grandpa’s family’s building looked like. (Please note that we lived in a very privileged area because we are lighter skinned Arabs – so this building is in a fantastic shape compared to buildings in other areas)