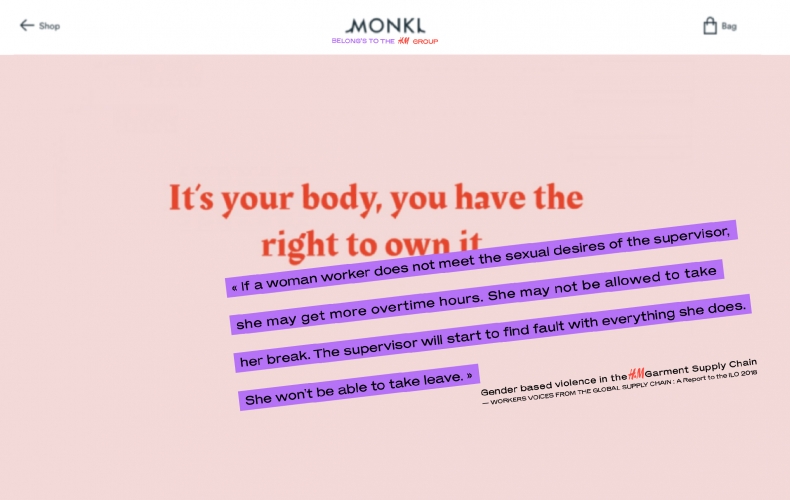 The Suffering Workforce Behind Feminist Clothes

In her project The Suffering Workforce Behind Feminist Clothes, transdisciplinary designer Claire Bonnet explores the relationship between how the H&M group uses feminism to sell clothes, and the working conditions in the factories that make them, She writes herself for Kultwatch about faux feminism, marketing and who gets to be included in the lofty statements of the corporate social marketers.

Despite the fact that feminist movements have drawn attention in the media in the past few years, they are still subject to an extreme amount of stereotypes. These movements are either ignored or deemed as too radical. They are seen as movements propagating hate toward men and bringing confusion on genders. These kind of stereotypes affect whether feminism is accepted or rejected. Some people are questioning the use of the word feminist itself even though they might agree with feminist values. They are afraid to call themselves feminist.

In the working sphere, these kinds of harassment are often a direct obstacle that could prevent feminists from working freely. There is almost no legal framework protecting the victims of these harassment campaigns. Consequently this situation often leads feminists to practice auto-censorship. Especially when they have a public identity, such as journalists, activists, researchers or artists. In the end, they are often afraid to use their real name on their work. They soften their voices or even stop themselves from working with feminist issues. Anti-feminist movements are especially virulent towards anyone that threatens white male identity.

By contrast, today’s fashion industry is glamorizing  feminist movements and reducing it to a slogan or a narrative. They use pink and pastel colours, create glossy ads and print feminist slogans directly on products as marketing tools. But what lies behind these new ways of communicating?

In her lecture Calling Bullsh*t on Faux Feminism as a Marketing Commodity, communications consultant Katie Martell uses the term faux feminism for the exploitation of feminism by the advertising industry. She denounces what lies behind the scenes of some brands using feminism to sell products, like the personal care brand Dove, which raised its sales from 2.5$ to 4$ billion with its campaign promoting a vision for beauty equality. Brands are using feminist narratives to profit from women’s engagement. They have seen an opportunity to sell more products to more women while glorifying their brand image.

Some employees and customers may think they are contributing to a good cause by selling or buying empowering slogan garments from a company that seems progressive and feminist. They may think that wearing feminist slogans printed on products is one way of engaging in a direct dialogue with the people who react to it and therefore spreading political messages. Also, they may believe that they are a part of a company fighting for equality, standing for feminist values. But in reality, a lot of these companies are just using feminist narratives as marketing tools while enslaving women. It is what Katie Martell has called the illusion of progress. 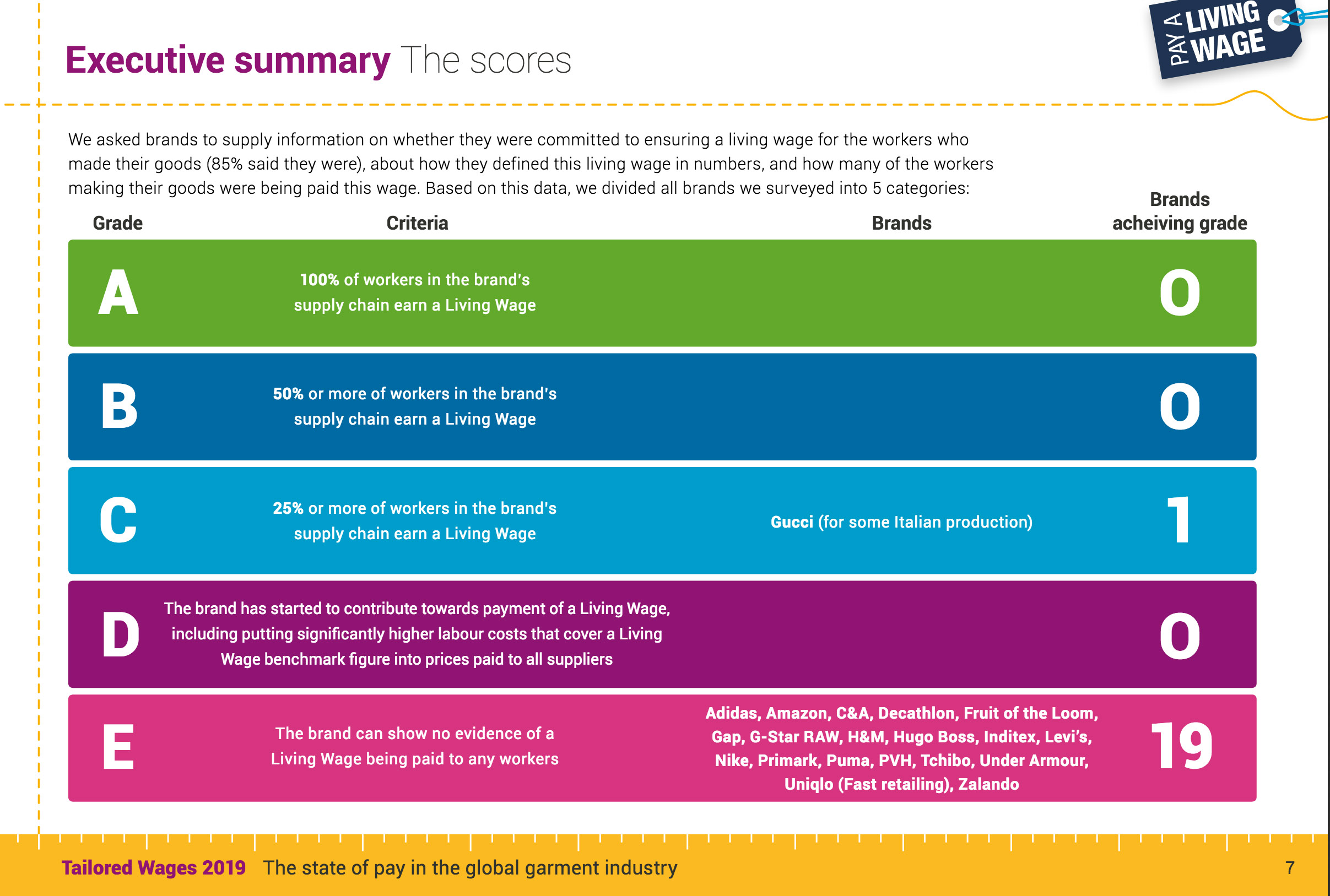 For the past few years, I have been working on a research project at Konstfack University in Stockholm called Femme: extinct stereotypes. It was presented as a retro-futuristic exhibition taking place in 2050, in a utopian world. It aimed to show, explain and deconstruct how women were portrayed around 2020; how society and (pop) culture were deforming humans into stereotypical women. One of my themes was about the commercialisation of the feminist movement. 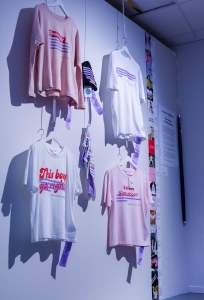 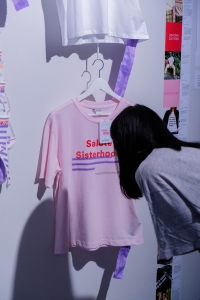 I have focused my work on the garment industry, taking the H&M Group as a case study. It is an interesting example as this group has several brands – H&M, COS, WEEKDAY, MONKI, H&M HOME, & other stories, ARKET and AFOUND – all of which communicate in different ways.

One of their brands, MONKI, is constructed around feminist narratives. The brand uses pale pink, body diversity and feminist statement as part of its identity. For its 10-year anniversary, the campaign Monkifesto highlighted 10 statements, such as “knowledge is queen”, “please yo’self” or “salute sisterhood”. They were advocating for women’s empowerment and claimed that as their brand values. But what is behind this marketing strategy? Does this company really “empowher” the women working in it? Under what conditions do the women who make these slogan tees really work? 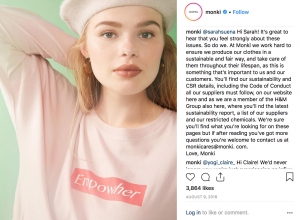 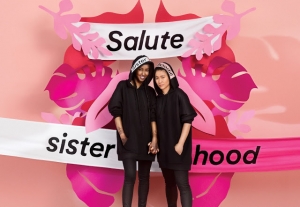 I have hijacked some of the H&M Group garments, the ones with feminist statements. I printed some parts of the report Gender-Based Violence in the H&M Garment Supply Chain, issued by workers’ rights group Asia Floor Wage, on top of the garments’ slogans. The workers’ voices, highlighting violence toward women in their factories, are disconnected from the initial message of the garment, denouncing what is happening inside the company. 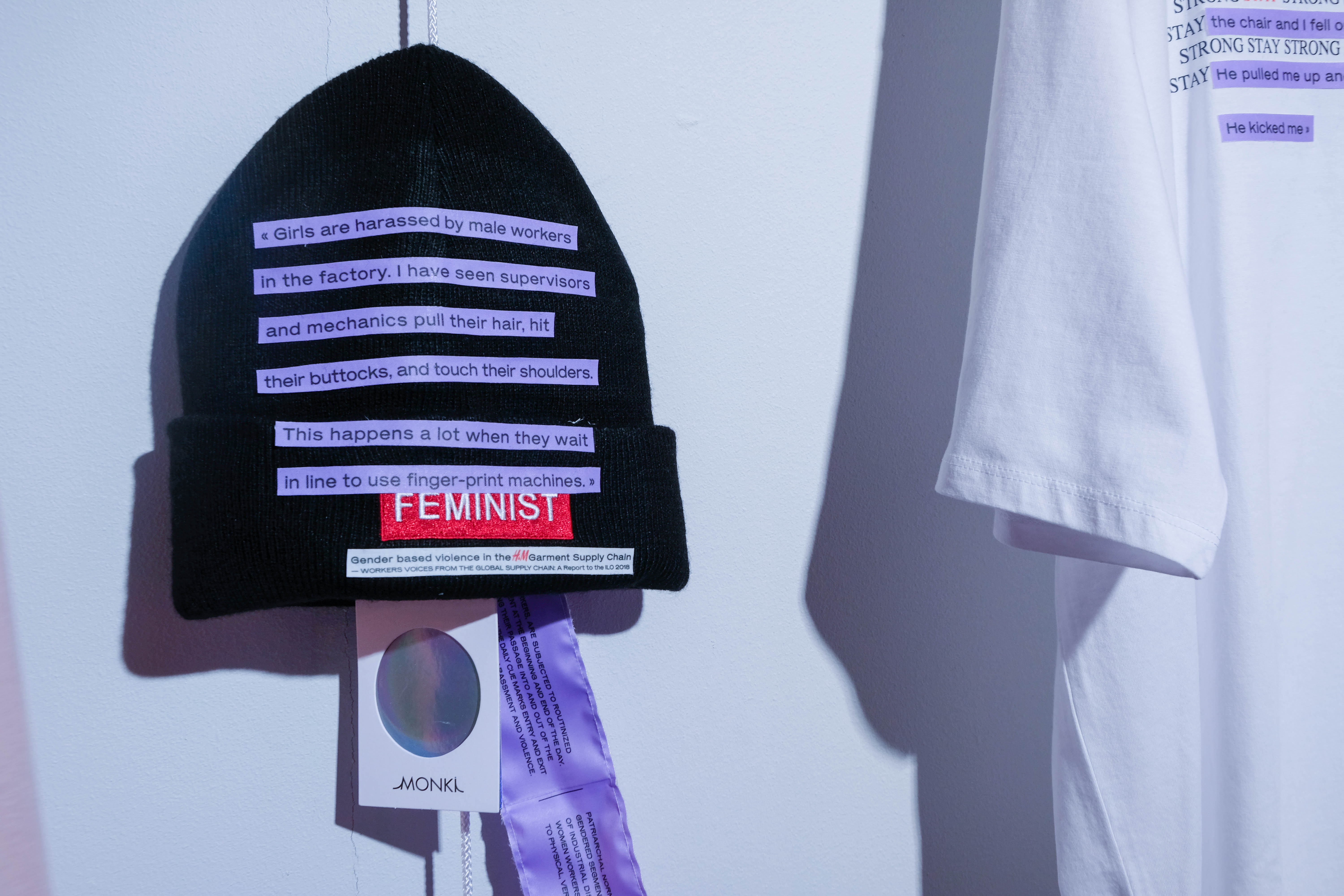 Monki is also collaborating with organisations like RFSU, Mental Health Europe and The Cup Foundation, but is this just a marketing strategy to whitewash their image? One press release states that “female empowerment is at the core of everything we do at Monki. I’m very proud to launch our collaboration with Lunette and The Cup Foundation and to provide young women in Kenya with access to menstrual care and education.” This can be read on Monki’s website, in the section about their campaign “periods are cool”. But what is happening in their factories? Are periods cool for all the women working for them?

You cannot empower some women while enslaving others. It is important to connect the products we buy to the women workers’ voices, too often forgotten and hidden by faux feminism used by companies. By superimposing the workers’ voices from some H&M suppliers on top of the H&M’s slogans used as feminist marketing, the reality behind these shiny clothes is revealed. It shows the way fashion industries are capitalising on feminist movements and how companies profit from them.

In April 2019, while I was finishing printing these garments, H&M created an Instagram post with this statement: “where are your clothes made?”. In the caption of this  image, they even claim to be proud of their transparency. But what does transparency mean when the H&M supplier factory list contains suppliers who are enslaving women? How ironic that this picture was posted while few months before, protests were happening on the streets in Bangladesh. International organisations were also raising alarms about workers’ conditions at the H&M Group’s suppliers. It is a perfect example of the illusion of progress this marketing strategy is creating. They are playing with the naivety and trust of their customers, who are often disconnected and unaware of what is happening in their factories overseas. At the same time as this image is posted, liked and shared with the hashtag #conscious, women in factories are starving, assaulted, raped and underpaid. While they are opening more shops, for the 2019 financial year around 335 new stores are planned to open, not a single worker is making a living wage.

Sadly, H&M Group is just an example amongst others. The global North is using the global South to profit from a cheap underpaid workforce. While feminist prints are appearing on mass produced garments, companies are neglecting to deal with their responsibilities in producing inequalities. Fast fashion is dictating the cadence of garment production, making the production targets harder to meet, which consequently brings violence. Apart from a change in the marketing strategies, industries are failing to take action. From underpaid workers to physical violence, the range of oppression and abuse, especially toward women, is deeply ingrained in the fashion industry.

These companies are tricking people with their communication. Let’s give more voices to the workers, let’s take our responsibilities and let’s keep awareness of the workers suffering instead of buying the next trendy tee.

Visual interpretation of head image: A slogan from the H&M group on a pink background. The slogan says “It’s your body, you have the right to own it”. Upon the slogan a quote from, Gender based violence in the H&M Garment Supply Chain – workers voices from the global supply chain: A repport to the IOL 2018,  is placed. The quote says: «If a woman worker does not meet the sexual desires of the supervisor, she may get more overtime hours. She may not be allowed to take her break. The supervisor will start to find fault with everything she does. She won’t be able to take leave.».