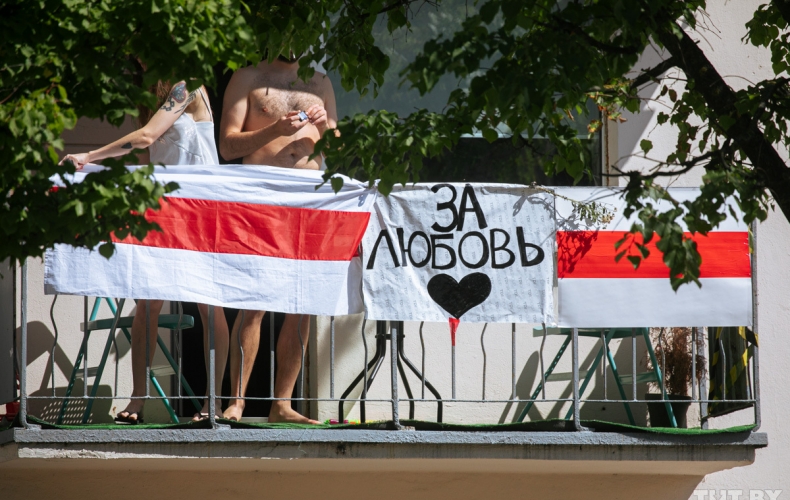 I know what you did this summer

I know what you did this summer. And other slogans from the protests in Belarus 2020

The Belarusian presidential election of August 9th 2020 sparked massive protests across the country. The results, which attributed 80% of the vote to Alexander Lukashenko, are thought by international observers to be falsified. A large number of Belarusian citizens shared this skepticism, taking to the streets to express their disbelief in the official count and to support the opposing candidate, Sviatlana Tsikhanouskaya.

The protests have continued every day for almost three months. Protesters are demanding free and fair elections, a cease to the brutal police violence that they’ve seen since the beginning of their demonstrations, freedom for detained protesters, and an end to Lukashenko’s regime. The protests have been accompanied by large strikes and a series of marches organized by women, seniors, and people with disabilities, respectively. Citizens and community groups have also organized petitions and financial support. Despite the severe situation, participants have produced an impressive array of creative slogans and catchlines.

Kultwatch publishes a selection of photographs from the independent Belarusian news portal Tut.By, that has been reporting on the ongoing situation. In retaliation, government officials revoked their media credentials for three months beginning in early October.

“Your Uber Discomfort has arrived,” accompanying a drawing of a pre-charge detention car used by police to detain protestors. The slogan alludes to the Uber taxi service’s comfort options. 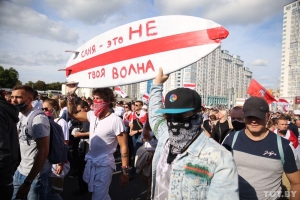 “Sanya, this is not your wave,” written on a surfboard.

Sanya, together with Sasha, are the most common nicknames for someone called Alexander (or Alexandra). The diminutive versions are normally used for children and younger people, close relatives, friends, and familiar relations. The use of a nick-name, rather than Lukashenko’s full name, can be read as condescending and intentionally disrespectful. It can also be viewed as a remark on the president’s own habit of addressing people rather impolitely. 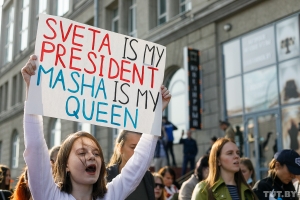 “Sveta [Sviatlana Tsikhanouskaya] is my president and Masha [Maria Kalesnikava] is my queen.”

While referring to Lukashenko using the diminutive version of his name might express a certain disdain, supporters here seem to convey their warm attitude towards his opposition by using affectionate nicknames for them. 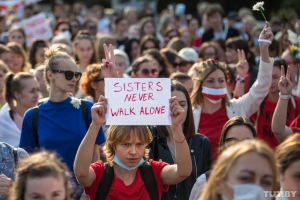 “Sisters never walk alone” – a slogan that was used by detained sisters Inga and Veranika Lindarenka. It was also used in one of several women’s marches, where the participants dressed in white and held flowers to mark the peaceful nature of the demonstrations. The slogan also makes implicit reference to the patriarchal language used by Lukashenko, who stated that women are fragile and unsuited for politics. 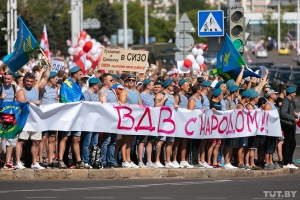 “The airborne forces are with the people” and “Lukashenko and Ermoshina to the SIZO, Omon – do your job!”

Protestors call for both the self-proclaimed president as well as Lidia Ermoshina, member of the Central Election Commission of Belarus, to be locked up in a detention centre. They are asking the special police force, Omon, to perform their duty. 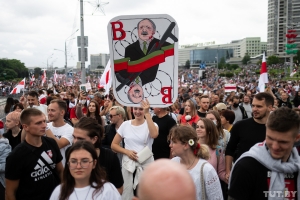 Lukashenko as a playing card. The cyrillic letter “В” (V) stands for valet, equivalent in Slavic playing cards to the Jack. It may also mean “idiot” or “fraud” in prison slang. 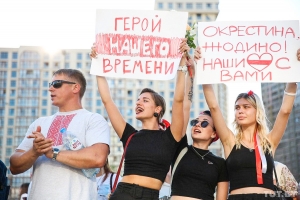 “A hero of our time” – a reference to Mikhail Lermontov’s novel with the same name and its anti-hero Pechorin – and “Okrestina, Zhodino – our [hearts] are with you.”

Okrestina and Zhodino, the street name and city, respectively, where two of the most notorious detention centres are located. Arrested protestors have testified about the abuse and massive police violence they suffered when taken to these centres. 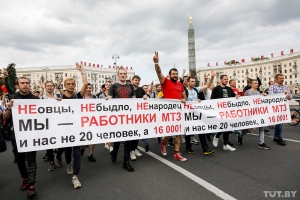 Workers of the Minsk Tractor Factory, MTZ, are responding to some of the pejorative names attributed to them: 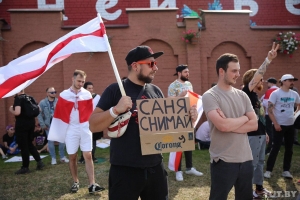 “Sanya, take off your Corona”. 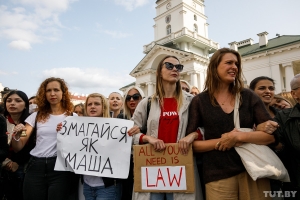 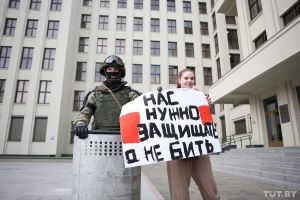 “We have to be protected, not beaten up.” 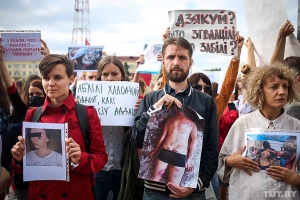 Protestors holding documentation of injuries received during detention, as well as written reports of what they experienced. Two of the testimonies read: “When they realised that [he] was a pianist – they started to break fingers,” written in Russian, and “They submerged me in cold water when they asked me to [unreadable],” written in Belarusian. Russian and Belarusian, related languages, both belong to the East Slavic language group and are the two official languages of Belarus. Russian is dominating, while Belarusian is being more commonly used within the opposition. Opponents Tsikhanouskaya and Kalesnikava are using the Belarusian version of their names, while Lukashenko is using the Russian form. 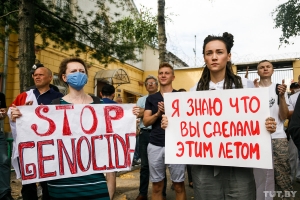 “Stop genocide” and “I know what you did this summer”.