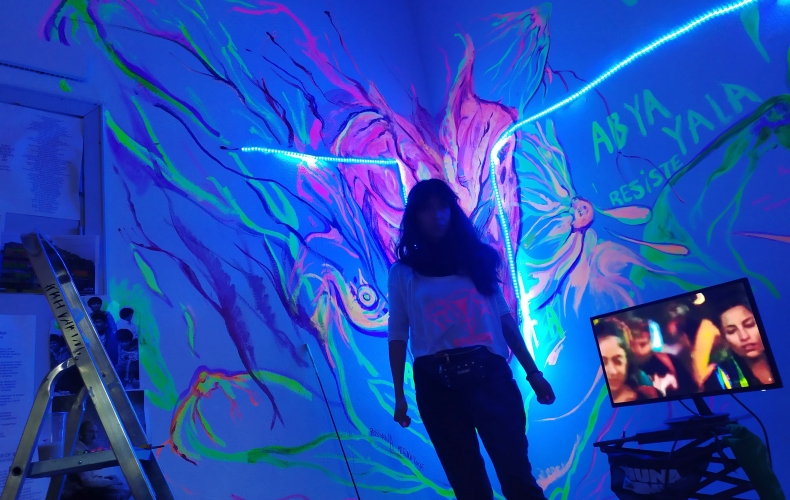 As part of Rundgång 2019 at the Royal Institute of Art in Stockholm, artists Milagros Bedoya and Rossana Mercado-Rojas created a sound installation, performance space and live painting based around the form of a merry-making happening, filling the space with sounds, chaos, languages and stories to reclaim a corner of the institution. For the event they invited Princess Jiménez to perform her piece “The Myth of the Good Immigrant”. Today, Kultwatch is publishing the text of Princess Jiménez’s performance, as well as a video recording of it, and a short description of the artwork written by Rossana Mercado-Rojas.

The Myth of the Good Immigrant by Princess Jiménez

Children that are more Swedish than IKEA (except for tax evasion and affiliations with the Nazi Party during the 1940s) will be deported out of the country because of their Afghani origin. Children that don’t know any other country than Sweden, will de deported just because of their origin. Children as young as 5 months old have being ordered to leave the country by the Swedish immigration agency. But why? They followed all of the rules on “how to be part of society”.

The “good immigrant” and “the good minority” myth means that if we, minorities, “behave” and “do as we are told” everything is going to be fine, we will be treated with dignity and respect, but as its name says, it’s just a myth. It demands from us that we are dignified when facing violence and injustice, it creates division among communities, fosters internalized racism, takes away responsibility from structural racism, stops us minorities from having discussions about racism and controlling our own narrative, and show the ones who finally fight discrimination and bigotry as “ungrateful”.

The “good immigrant” and “the good minority” myth means that if we, minorities, “behave” and “do as we are told” everything is going to be fine,

“Ungrateful” is such a funny word for me, like if having dignity is an insult. This also adds up to the myth that “diversity” is something new that all these poor, homogenous European countries must endure.

Diversity has always been part of Europe:

etc. etc. etc. I am not here to give you a history lesson! Do the work yourself! I don’t need to do mental gymnastics to justify my existence!


“Ungrateful” – what a word! My favorite word. I wish I could have it tattooed on my forehead.

We are so ungrateful…


“You need to integrate to European values”

My native language is European.

I only speak European languages.

I grew up under a European religion.

I have a European last name.

I had a European education.

I have read European authors.

Some of my ancestors were European. (The bad ones.)

I have followed European traditions all my life.

Both my home country and its capital have European names, where we also have statues of European historical figures.

Our music and food have European influences.

Our wealth, gold, crops, and even ourselves have built Europe.

What do you mean?

I don’t need fake celebrations of diversity from a neo-liberal perspective. I don’t need H&M ads telling me that “I am awesome” with token black models for their ad campaigns after the racist mess they did more than a year ago, to sell a fake image of equality, while they exploit and kill women of color in their sweatshops abroad and contribute to the planet’s destruction by creating tons of fast fashion.

I know I am awesome! I know my hair, my body, and brains are amazing! What I need is to have structural racism destroyed and reparations. What I need, white cis people, is for you to listen.

And to my siblings, I want to read this to you, a fragment from Pedagogy of the Oppressed by Paulo Freire:

“Hopelessness is a form of silence, of denying the world and fleeing from it. The dehumanization resulting from an unjust order is not a cause for despair but for hope, leading to the incessant pursuit of the humanity denied by injustice. Hope, however, does not consist in crossing one’s arms and waiting. As long as I fight, I am moved by hope; and if I fight with hope, then I can wait.”

As the student exhibition occurs we overtake a corner of the KKH with colorful psycho(delic) lights, music and paint. On our backs and through our hands and mouths we bring our sounds, chaos, languages, and stories with us and reclaim a space and our right to inhabit it.

Milagros Bedoya initiates the invitation by drawing Guaman Poma’s characters among the Matapacos and our beloved Peruvian beer. We enter the space with song lyrics as iconic as “Me gritaron negra” (They yelled at me, Black) by Victoria Santa Cruz and narcosis’s “Sucio policía verde” (Dirty green cop). On the walls we encounter Rossana Mercado-Rojas painting gigantic colorful breasts/mountains shooting milk, liquid of life. Indigenous cultures, the mountains, are warriors, protectors and givers of life. Dadoras de Vida. ¡Abya Yala Resiste!

The myth of the good immigrant resounds through the strong voice of Princess Jimenez and her spoken word intervention.

Image description, top image: Rossana Mercado-Rojas stands in front of part of La Gozadera. A strip of LED lighting is placed across the wall, shining the scene in blue light. The wall is covered by her painting. To the left there is a ladder and a set of text pieces and photographs taped to the wall, to the right a television screen. Above the screen the words “Abya Yala Resiste” have been painted. Photo courtesy of Rossana Mercado-Rojas

Princess Jiménez is a Dominican who's lived in several countries around the world, and currently resides in Stockholm, Sweden. She runs the podcast MangoPodcast and tweets as @PrincessJB87.